Musician and multidisciplinary artist, Alex Augier develops digital aesthetics from a musical and transversal perspective, including sound, visual and formal materials. These elements dialogue within the scenic space and mainly take the form of audiovisual performances. He considers this art as a specific field of creation where each element is definitively linked in a singular form, coherent and interpreted as a single piece.

The transversality of the projects seeks to free oneself from traditional forms, to imagine new ways of performing, to create unique spaces specifically adapted to their diffusion and to offer the public a unique experience. Vitruvian Man by Da Vinci remains the guiding thread of this aesthetic research. Universalism of the Renaissance echoes digital multidisciplinarity of today. Alex Augier thus defends a global vision of the creative process where design, technology and programming are an integral part of the artistic project. His « low-level » creative approach involves know-how in the fields of sonic and visual synthesis and programming, raw material for the future works.

These performances include oqpo_oooo nominated for the Les Bains Numeriques prize in 2016 ; _nybble_ presented in the Electro exhibition in 2019 to illustrate the new A/V lives (Philharmonie de Paris) ; end(O) an immersive artwork for geodesic dome ; p(O)st, pr(-) and hex(A) which develop an original audiovisual spatialization technique and interface design. 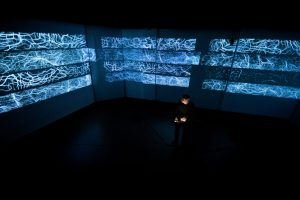 pr(—) is the Site-specific version of p(O)st.

Instead using the cylindric screen of the initial project, pr(—) use directly the architectural characteristics of the venue (concert hall, museum, public space…) in the order to propose an unique setup. Using up to 4 videoprojectors, the material is mapped on any adapted surfaces and use the « band-like » visual (up to 4 ultra-short-throw videoprojectors, setup on the floor, are provided by the artist). pr(—) keep the transversal approach of the original project by integrating generative visual, space, new ways of performing and avant-garde interface specifically programmed for the project.

The transversality of the performance is a beautiful illustration of how current artists emancipate themselves from traditional forms, going beyond the codes of known aesthetics, imagining new ways of playing, creating unique spaces specifically adapted to their diffusion.